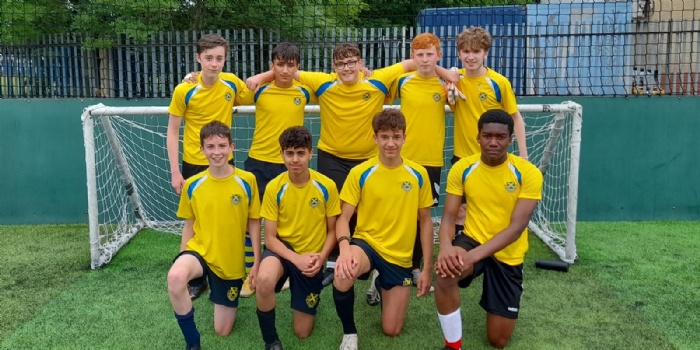 We are delighted to report the success of our Year 9 football team who, after a year and a half, attended their first football fixture against other schools.

With twelve goals and only two conceded, the team won the tournament and secured the trophy. Student reporter, Callum, gives us his account...

Going into this tournament Finchley Catholic High School aimed to win of course but our main aim was to have fun and show respect. (We can’t deny that we also hoped to have dominance over all the other schools!)

Our first game was against Friern Barnet. Going into this game we needed to win as it was our first match. The ball is dropped and the whistle blown; we spread out and use the full size of our pitch to our advantage. We pass the ball around making the other team chase. Then we see an opening: the ball is played through the middle to Daniel who runs past one player, adjusts his footing and strikes the ball into the back of the net. 1-0. After this we get more chances but don’t put them away so we end the game at 1-0.

Our second game was against Whitefield. The ball is dropped and we start aggressing on the opposition; we shoot but the strike goes above the allowed height and the whistle is blown. Then our manager and coach Mr Fletcher took this chance to make two effective substitutions, subbing James into the defence and Josh into the midfield. The ball is played through past our midfield but our defender is there to stop it. After playing an effective ball through the middle towards our striker, Yan takes a touch and strikes scoring our first goal helping us take the lead. After this we pounce right back on our opposition pressuring them; this pressure leads us to obtaining the ball and once again the ball is played out and back into the middle to our striker who skilfully goes past a player then strokes the ball into the goal. Final score 2-0

Our third match was against London Academy; we kept this same team on and proceeded to start this game. The ball is dropped, the time starts ticking down, we receive the ball from the centre and play it back to our goal keeper, Tommy, who controls the ball and brings it into his safe hands. After this, he rolls the ball out wide to Daniel who does a one two with Yan moving into the space that emerges. Then he strikes the ball which slots past the goal keeper in the bottom corner putting us 1-0 up. Tactical substitutions follow into the mid field and mike up front. The game continues: our player pressures, steals the ball and quickly shoots scoring a fantastic goal. 2-0. The game ends and we are victorious one again.

Our fourth game was against Hendon who were a scary opponent as we watched them play on our break game and they were fast and very good team. We get on the pitch and the whistle blows; the opponent aggresses with the ball. Luca steals the ball from their feet, running up the right side and at a very difficult angle shoots and scores putting us 1-0 up. After this, a substitution is made: Callum and Josh are subbed back on to increase the speed of the game. As this happens the ball is passed to Daniel who is open; he shoots scoring us our second goal.

Our fifth game was against JCoss. The ball is dropped and we approach. We shoot, chance after chance, always missing. This was bad: time was running out and we didn’t have the ball. The opponent advances, plays the ball out wide and only just about gets the ball past our keeper resulting in a 1-0 loss.

Our sixth game was most important: we were playing Compton, our biggest competition and our rivals. We enter the pitch with glares from the opposition, the ball’s dropped; the game begins. We get the ball first and are playing the ball around when we see an opening. We take it. Yan is in front of goal alone and he kicks the ball over. We all get back in position and shrug that chance off our shoulders. After this Compton advance the defence but Calum forces him out wide and James steals the ball. We attack. Seeing Yan creating space, James plays the ball through and Yan strikes first touch scoring a beautiful goal.

We were through to the finals. As we advanced to our final opponent we stopped to have a group discussion about the weaknesses in our game to help us play the best football we could in the finals. We advance onto the pitch in hopes of winning against our opponent, East Barnet. The ball is dropped and the tension is high; the ball is being moved fast and the opponents aggress towards us only managing to sneak the ball past us for a shot but our goal keeper has it covered saving it and instantaneously rolling the ball to the wing to Daniel who strikes scoring a goal giving us a good lead. After this the ball is played and an injury occurs; our defender has to come off. He is replaced by James. The ball starts moving and suddenly the opposition get through striking the ball into the bottom corner scoring a goal to equalize. Time runs out and this leads to penalties.

We chose Daniel, Luca and Tommy to take our penalties. Daniel steps up; he takes a deep breath trying not to over excite himself; he takes two steps and slots it into the bottom corner giving us the lead. Tommy steps in goal; the opposition shoot their first penalty, scoring also by putting it in the bottom left. Next Tommy steps up to take his penalty; he steps to the ball and strikes it with power. The ball shoots like a bullet down the centre giving us the lead again. Next Tommy steps in goal again as the next player approaches to take his penalty. The player steps up, strikes and Tommy dives to the left saving the goal. Luca steps up as the final penalty taker. If he scores, we win. He places the ball steps back and composes himself. He runs and shoots slotting the ball in the bottom left.

Thanks to the final penalty, we won. We went to shake hands and showed great sportsmanship and respect to the other team. After this we centred the whole team and praised each other for our brilliant performances and then finally headed back home. After not playing football for a year and a half we were happy with our performances and walked onto the bus with pride.