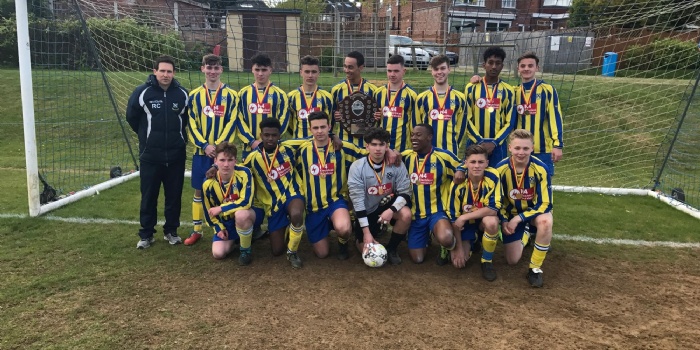 On Wednesday 26th April, the Senior 1st xi Football squad took on the mighty Ashmole who had won the quadruple the previous year, at Southover in front of a big crowd who refused to let the inconsistent weather conditions hinder their love for their sons, friends and school.

The early exchanges were all Finchley, with a conviction and urgency to their game that Ashmole were struggling to cope with. However, Ashmole always looked threatening on the break with a strong and powerful striker causing havoc and against the run of play took the lead. Finchley soon fought back with a powerful surging run by Matt Tierney from Kylans corner and headed past the keeper from close range. Half time arrived and Mr Cussell spoke positively about the performance and to 'believe' that if we continued to maintain the intensity as was showed in the first half, and stop the outlet to the striker we would win the game.

In a slightly less entertaining start to the 2nd half then the previous 45 mins, Finchley created few chance and still looked prone to concede against the dangerous Ashmole counter attack.

With this in mind, Jeremie Agholor was reverted back to centre back to instil some extra power and pace in the back line.

The danger of Ashmole's number 10 had been reduced and Finchley were once again on the front foot. Who was going to step up and ensure Finchley won their first Senior Middlesex League Title since 1999?

The answer was as expected, Ryan Kukoyi, the leader of the pack and captain of the side. He drove forward with the ball with conviction, and from 25 yards out struck a sweet left foot shot that drilled to the keepers left and the right side of the goal.

Finchley had rightly taken the lead and with only minutes to go, with the tirelessly hard working Jake Helcke laying off for James Murphy to slot home with his right from 10 years out.

The ref blew up for full time, the supporters ran on the pitch and Finchley Catholic High celebrated in a glorious achievement that will stay with the players forever.