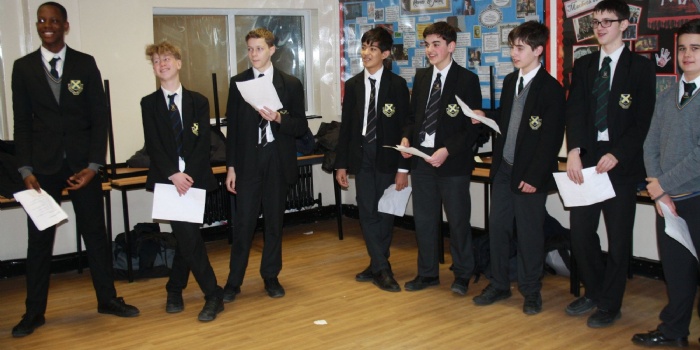 Student reporter, Oliver, reports on the recent Shakepeare workshop enjoyed by Year 9 students: An actor from the Globe theatre kindly visited us to give us a taster on what it is really like to act in plays by William Shakespeare. In our English lessons, we are studying ‘Much Ado About Nothing’, a play written by Shakespeare in and around the late 1590s.

William Shakespeare himself introduced many new words into the English language at the time, so at the start of the workshop we were given a sheet that included one of the scenes in the play that included some words that we may not have heard of. If there was anyone who was unsure of the definition of any particular words in the text, the actor told us what the word meant. I felt that this was very beneficial for not only when we performed the scenes – but also for our genuine studies regarding Shakespeare and his plays because we would have a better understanding of the scenes. After this, everybody was given a certain line that they were told to give their personal opinion on. This included sharing to everybody what they thought the line meant, and whether or not they thought that the line itself was effective.

Continuing on from the previous activity, the actor taught us how to use body language and gestures to help portray the line that we were saying. In this particular case, everyone chose one word from their line that they thought was the most significant – and had to come up with a gesture to represent that word. This must be very important in Shakespearian acting because it gives the audience a better idea of what the characters thoughts and feelings are.

Once we were finished with the second activity, everyone was split up into groups of four or five, and each group was going to practice performing the scene. Everybody in the group was assigned a character, and the groups rehearsed for ten minutes or so. I really enjoyed this part of the workshop because it required and enhanced team skills whilst also adding elements of drama. During rehearsal time, the actor pointed out that because the Globe is round - characters would have to move around a lot to ensure that there back wasn’t facing the audience for too long. We used these tips to help us enhance our performances, and all around make it more entertaining. Unfortunately, we did not have time at the end of the workshop to perform our scenes – but I must admit that it was very interesting learning about how actors from the Globe portray their characters throughout different plays.

All in all, I had a very good time during this workshop. It brought a variety of different things like thinking skills, acting and analysis together which made it very fun for everybody taking part. Personally I want to say thank you to the actor from the Globe who came down to give us an insight on what it is like to act in one of Shakespeare’s’ plays, and also a thank you to all of the English department that gave all of year nine this opportunity.